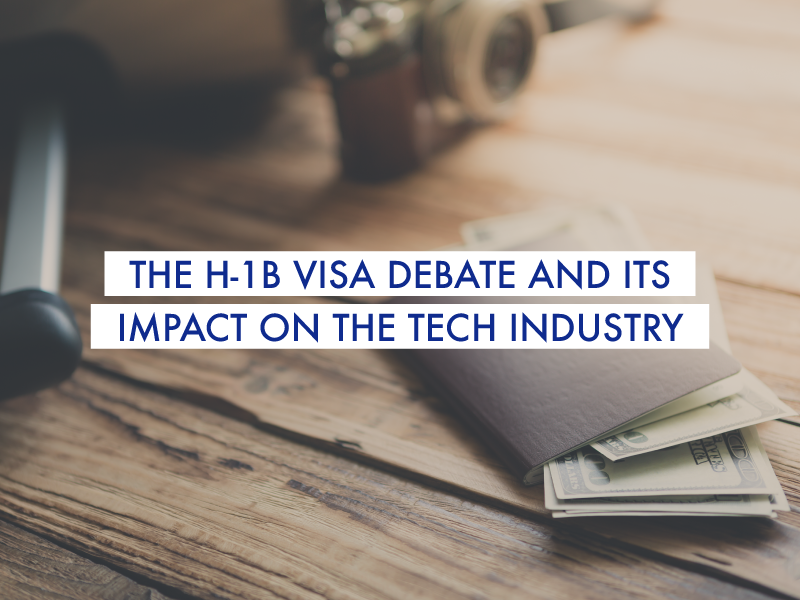 The debate over H-1B visas has stirred quite the controversy of late over whether the visas are necessary to overcome a talent shortage in the U.S. or if they are simply a means for companies to protect their bottom line at the expense of American workers.

The H-1B visa is a non-immigrant visa that allows U.S. companies to employ foreign workers in specialized fields for a period of three years. The visas are issued annually on a lottery basis with a cap of 85,000 – with 20,000 of those visas awarded to foreign students who have completed graduate programs at a university in the U.S.

Who is against H-1B visas and why?

Many Americans who have been displaced by foreign workers holding H-1B visas in the U.S. are naturally against further expansion of the visa program. They believe that there is no shortage of tech talent in the United States and that their unemployment is proof of this. Some of them believe that companies take advantage of the H-1B visa program to cut costs and drive their bottom line.

American workers also complain about outsourcing companies from India like Infosys, Wipro, and Tata Consulting who they believe bring thousands of foreign workers to the U.S. every year that eventually inflate the labor pool and depress wages. There is some argument to be made against H-1B visas because of these companies. Because the H-1B program operates as a lottery system, outsourcing companies flood the application pool with petitions and bring in contractors from overseas for comparatively unsophisticated technical work at the low end of the H-1B pay scale.

As it turns out, high-tech companies actually want the same thing as laid-off IT workers. They too see a flawed system and want a more effective H-1B program where outsourcing companies can’t eat up all the visas.

Who is for H-1B visas and why?

Tech firms argue that there is indeed a shortage of talent for high-skilled tech workers in the U.S. – a claim with some truth to it. The thing is, location absolutely matters in this case. Some areas in the U.S. have ready access to American workers with good talent, while others simply don’t and need to turn to foreign workers to grow their company.

For many high-tech companies, the H-1B visa program isn’t about cutting costs. Rather, hiring an H-1B worker over an American can be expensive. Companies have to spend thousands in legal and government fees for each H-1B visa and must pay their workers a “prevailing wage” for each job. If they want to avoid long wait times, they also pay premium processing fees. Although, the Trump administration is already looking to do away with that option. (More on that later in the blog post.)

What high-tech companies are really after is the diversity of talent, so they can continue to provide innovative products and/or services to their customers. In fact, America’s tech economy has long dependent on foreign-born workers. “Immigrants have founded 40 percent of companies in the tech sector that were financed by venture capital and went on to become public in the U.S.,” writes Laszlo Bock, a senior VP of Google. The companies on this list include the likes of Google, eBay, Intel, and Yahoo. The immense impact of immigration on technology in the U.S. is a big reason tech giants such as Google, Intel, HP, and Microsoft strongly support increasing the cap on H-1B visas.

Are H-1B visas leading to an increase in U.S. unemployment?

The truth is that H-1B visas holders only represent a small share of U.S. workers. By law, they are capped at 85,000 per year with recipients chosen by a lottery system. What’s more, only 40 percent of applicants actually receive visas. Are there abuses of the system? Absolutely, but many believe the abuse is not at a large enough scale to warrant doing away with the program. Instead, improvements must be made.

What are the Trump administration’s plans for H-1B reform?

In early March, the Trump administration released its plans to curb the H-1B visa program by introducing a temporary suspension of premium processing for H-1B visa petitions. Premium processing ensures an application will be reviewed within 15 days and costs $1,225 for each application. The press release issued by USCIS stated that they want to “reduce overall H-1B processing times”. By suspending premium processing, the department can focus on “process[ing] long-pending petitions” that have been left on the back burner due to an influx of premium processing requests. The change went into effect on April 3, 2017, and may last up to six months.

To the tech industry, this latest move by the Trump administration is seen as hostile because they now face longer waiting times and uncertainty in their business. For smaller companies who can’t afford the premium fees, this new change could be great as it would mean their applications will finally be reviewed.

What are others proposing for H-1B reform?

Many people frustrated with the H-1B visa program have proposed raising the minimum salary requirement. This would force outsourcing companies who abuse the program to pay their workers the wages they deserve and could possibly lead to fewer displaced American workers as a result of the program. However, a high salary is not economically feasible for tech companies in different areas across the United States. These companies would be missing out on necessary talent that they can’t find in their area.

Another proposed solution to the H-1B visa debate includes splitting the visa into two categories: one for companies looking to hire foreign workers directly and another for outsourcing companies. This would curb abuse of the H-1B visa by the later party.

In Congress, three major bills have been introduced to reform the H-1B visa program. Representative Jason Chaffetz (R-Utah) introduced a bill in January to replace the per-country immigration caps with a first-come-first-serve system. Senators Chuck Grassley and Dick Durbin also introduced a bi-partisan H-1B reform bill that eliminates the lottery system and gives priority to foreign students educated in the U.S. Lastly, in order to address a main criticism of the H-1B program – that outsourcing firms exploit it to hire foreign workers – Representative Zoe Lofgren (D-Calif.) introduced a bill that would increase the minimum salary requirement to $130,000 (up from $60,000) for the beneficiary of the H-1B visa. The bill also seeks to win over small employers by setting aside 20% of the annual H-1B visa allocation for small and start-up employers with 50 or fewer employees.
The fact that much of the debate surrounding the H-1B visa program has so far been focused on reform is a good sign that most people see the program as beneficial to the advancement of the tech industry, even if they are concerned about American workers.